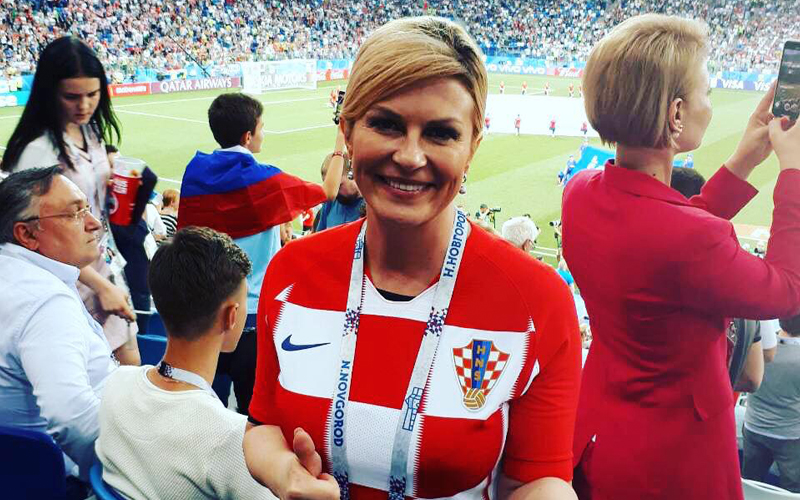 Like a true football fan, Croatia President Kolinda Grabar-Kitarovic, dressed in the colors of the national flag, was spotted cheering for the players at the stadium during the quarterfinals against Russia last week. Her celebratory gestures went viral on social media.

Ms. Grabar-Kitarovic flew economy with fellow Croatian football fans. Even broke into a victory dance with the players after Croatia defeated Russia in the quarterfinal match last week. She also made a surprise entry into the locker room and congratulated and hugged the players after the match.

After finishing at 2-2 at the end of regulation time, Croatia and Russia headed into the penalty shoot-out to decide the winner which will face England in the semi-final next Wednesday. However, it was only on the last strike from Ivan Rakitic that sealed the qualification for the Croatian team.

As videos and pictures of the football fan President emerged on social networks. She also became an internet sensation and won hearts of all football lovers for lending a passionate support to the country’s football team.

Before the Semifinal match, the Croatia President posted encouraging words for the players on her official Facebook account. She had also praised them after they beat England 2-1 to set up a final date with France on July 15.

Kolinda Grabar-Kitarovic was elected Croatia’s fourth president in January 2015. She is the first woman to ever hold the title of president for the eastern European country.

The 50-year-old President speaks eight languages including Portuguese and Italian. She has been married to Jakov Kitarovic since 1996 and the couple has two children.