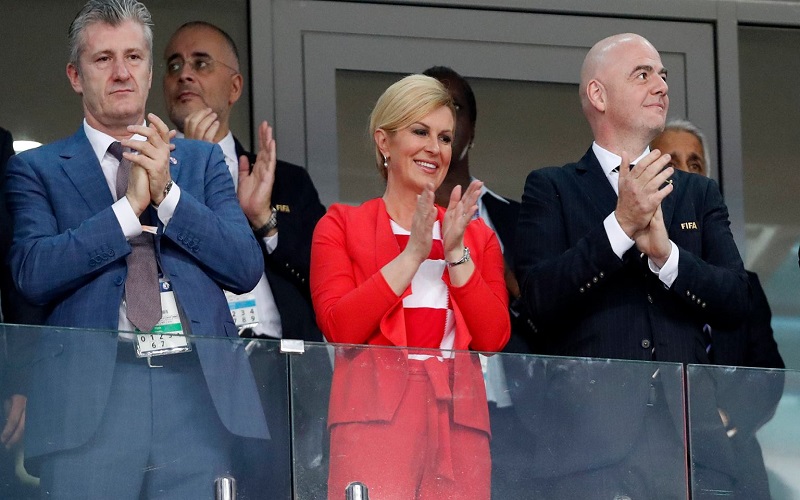 France won FIFA World Cup 2018 title. England’s Harry Kane won the Golden Boot and Croatia’s Luka Modric won the Golden Ball. The Belgium goalkeeper Thibaut Courtois won the Golden Glove. Fans all over the world want another category of awards that is the Golden Political Leader. They add that no one deserves it more than Croatian President Kolinda Grabar- Kitarovic.

Standing firm in her support for the national team in Russia, Kolinda had been a personification of grace and footballing passion. Even when the chips were against her team in the knockout stages, she kept her poise and maintained calm in triumph.  She garnered wide-spread admiration after her team went down to the French in the title clash of the biggest football tournament in the world.

#WorldCup2018 Respect to @KolindaGK President of #Croatia
-She didn’t miss a single match
-Travelled in economy class
-Always in the stands with the fans
-refused to take any pay for her days not at work.Standing In Rain Without Umbrella Hugging Players To Appreciate Their Game. pic.twitter.com/r2GyxDQ27A

Related Article – These Pictures Are Not of The Croatian President

Kolinda seated next to the French President Emmanuel Macron and followed every on-field move closely. She congratulated Macron when the French took the lead, cheered when her team fought back. Eventually walked hand-in-hand with her French counterpart after the end of the match.

Even on the podium, Kolinda congratulated every single player of France and official that came up. Much like the Croatian Players and fans, it was an emotional moment for her but she appeared extremely well. She kept her emotions in check. When her team’s player made their way to the podium, she greeted them with a smile, a hug and a message. It showed how proud she and her country was of what the Croatian national team had achieved.

Throughout the tournament, Kolinda has been widely praised for being one of the most sportings of the political leaders in attendance. The first-ever woman president of Croatia showed charisma that left a lasting impression. And for all her charm and charisma, there was a passion for her team and football that millions instantly connected with.

Many are saying that it if the tournament had a category awarding political leaders for their sportsmanship, Kolinda would have been the outright favorite.