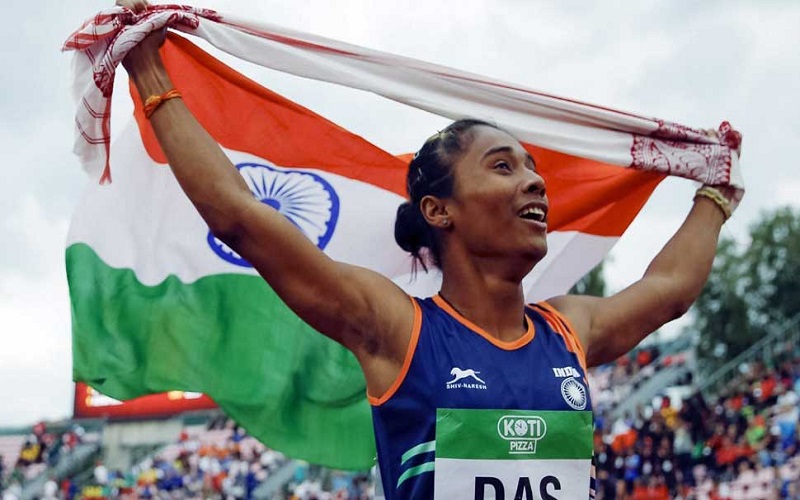 India had never won a medal in any track event at the medal in any event at the global level, senior or junior. That is until Hima Das showed up at the Ratina Stadium in Tampere. On Thursday, Das became the first Indian to win a track medal and when she did, it was gold.

And this is how Him Das became the first Indian woman to win an #IAAFworlds title pic.twitter.com/0Zhx0QuxZI

Hima won the women’s 400 meters with the time of 51.46 meters at the IAAF Under-20 World Championships. But even if her win did come in the juniors, it should be celebrated with as much gusto as her achievements at the Commonwealth Games.

Prime Minister Narendra Modi on Friday congratulated the 18-year old on the achievement. He added that her performance will inspire the young athletes. Narendra Modi tweeted India is delighted and proud of athlete Hima Das, who won a historic Gold in the 400m of World U20 Championships. Congratulations to her! This accomplishment will certainly inspire young athletes in the coming years”.

India is delighted and proud of athlete Hima Das, who won a historic Gold in the 400m of World U20 Championships. Congratulations to her! This accomplishment will certainly inspire young athletes in the coming years.

Hima Das creates history by winning Gold medal in 400m of World U20 Championships. She is 1st Indian athlete to win Gold in track event of U-20 World Championships. You have made 🇮🇳 proud. #NariShakti

Celebrities like Amitabh Bachchan, Shah Rukh Khan have congratulated her for creating a history.

T 2865 – CONGRATULATIONS .. #HimaDas , the first Indian Women to win a GOLD in World Athletic track event EVER ! INDIA is proud of you .. you have given us reason to hold up our heads HIGH ! JAI HIND !! 🇮🇳🇮🇳 pic.twitter.com/Q0YVCx6FSf

Woke up and felt a genuine wave of Pride Love & inspiration. What an amazing athlete you are…#HimaDas Kya Baat hai! pic.twitter.com/gcDnyXxwRj

Hima Das to her fans

Hima thanked her fans in India for supporting her. She said after the race, “I am very happy to win the gold in the World Junior Championships. I want to thank all the Indians back home and also those, who were here cheering me. It was very encouraging to have this kind of support ”.

The Assam girl clocked an Indian U -20 records of 51.32 seconds to finish the sixth in the Common Wealth Games 400m final in Gold Coast in April. Since then, she has gone onto improving her timings. She lowered the Indian U-20 record in 400m to 51.13 seconds while winning gold in the recently-concluded National Inter-State Championships in Guwahati.

She now joins the illustrious company of Star javelin thrower Neeraj Chopra. The one to win a gold in Poland in the last edition in 2016 in a world record effort.