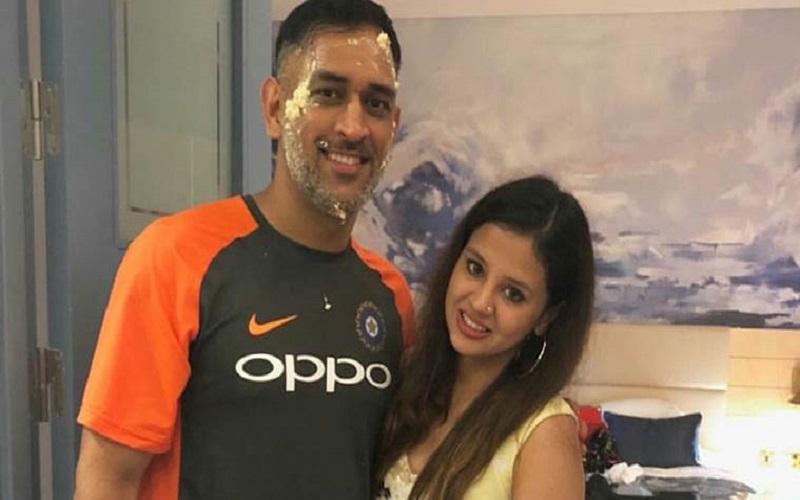 There was a big cause for celebration in the Indian team even though they lost the second T20 international against England in Cardiff on Friday as MS Dhoni turned 37.

Captain Cool, as he is still fondly called, celebrated his birthday with wife Sakshi, daughter Ziva. Along with, all the members of the Indian team in his hotel room after the game. Dhoni cut a cake with his family present at his side while his teammates sang Happy Birthday. The celebrations were led by Captain Virat Kohli and his wife Anushka Sharma as the rest of the team members also joined in.

Sakshi Dhoni, in an Instagram post, expressed her emotions towards her husband and credited the wicketkeeper-batsman for ‘teaching her about life in the past 10 years’.

“Happy Bday to you! Even words won’t do justice to how you are as a human being … 10 years I have learned a lot from you … and continue to .. thank u for making me see and deal with life in a straightforward practical way,” she wrote a caption with a photo of the two together, in which Dhoni was seen covered in cake. She also thanked MS Dhoni for making her beautiful.

Happy Bday to you ! Even words wont do justice as to how you are as a human being … 10 years i have learnt a lot from you … and continue to .. thank u for making me see and deal with life in a straightforward practical way .. .. Lot’s of love n also thank u for making my life so beautiful !

Captain cool Dhoni reached a significant milestone in the Cardiff T20I as became only the third Indian cricketer after Sachin Tendulkar and Rahul Dravid to play 500 international matches when he walked out on the field.

Dhoni became the ninth batsman to achieve the feat, surpassing former Pakistan captain Inzamam-ul-Haq (499). He is the only wicketkeeper in the 500-match club. Dhoni had made his international debut in 2004 when he was picked to face Bangladesh in an ODI in Chittagong. The former India captain has played 90 Tests, 318 ODIs, and 92 T20Is in his illustrious 14-year career till date.